The Sundowner Triathlon is a middle-distance event consisting of a 1.9km open water swim, 90km bike and 21km run. It takes place in East Yorkshire on a Saturday afternoon, so competitors are crossing the finish line as the sun goes down in a delightfully photographic sunset finish, hence the name.

With the Ironman World Championships in Kona, Hawaii only around the corner, Sundowner was the perfect opportunity for Lewis to race hard and boost fitness before going into the final block of Kona preparation.

With Ironman Italy on 21 September, Naomi had trained at full volume right up to this event which presented a challenging lack of freshness on race day. However, endurance sport is so imperfect. There’s a thousand different ways to get ready for races. If you have a way of reading performances based on your preparation, you can bank the experiences as they happen, move forward and learn from them.

Lewis’ race report
“Having worked hard on all three disciplines and not raced much this year, it was promising to see good improvements.
Despite having lost two minutes on the bike with a mechanical issue, I was able to run down the 5-minute deficit taking the lead half way through the 13.1-mile run.”
Lewis finished 1st overall in a time of 04:05:06. Ever critical and looking for improvements Lewis commented “It is always great to win and I really enjoy this event having won it in 2017. I was disappointed in my run performance, as I know I can run a lot faster. I put this down to the specific training I have been doing over the past couple months in preparation for Kona, that will hopefully set me in great shape for the World championships.”

Naomi’s race report
“The lake was quite small and so the swim comprised of 4 laps to make up the 1900m course. Despite my swim speed being muted by the short distances from one buoy to the next and the 6 inches of room we had between each athlete, I still managed to come out of the water in 4th. Game on.
The bike course was beautiful and scenic on flat and fast roads – just my cup of tea. I was able to just put my head down and find my rhythm without any interruption. I was having a blast and managed to ride down the gap to the girls in front. I got off the bike feeling great, put my running shoes on and ran out of transition in 1st place.
Part of the magic of triathlon is that it is so unpredictable. I felt great getting off the bike but as soon as I hit the run, I was curling over with cramps. I stopped, stretched and watched the girls run past me and out of sight. I never managed to shake off the cramping and was unable to go with anyone who passed me, which made for a long slog to the finish. I didn’t give up and managed to salvage 4th overall female and age cat winner, finishing in a time of 04:52:02.
I will come back to this course in the future and try again.” 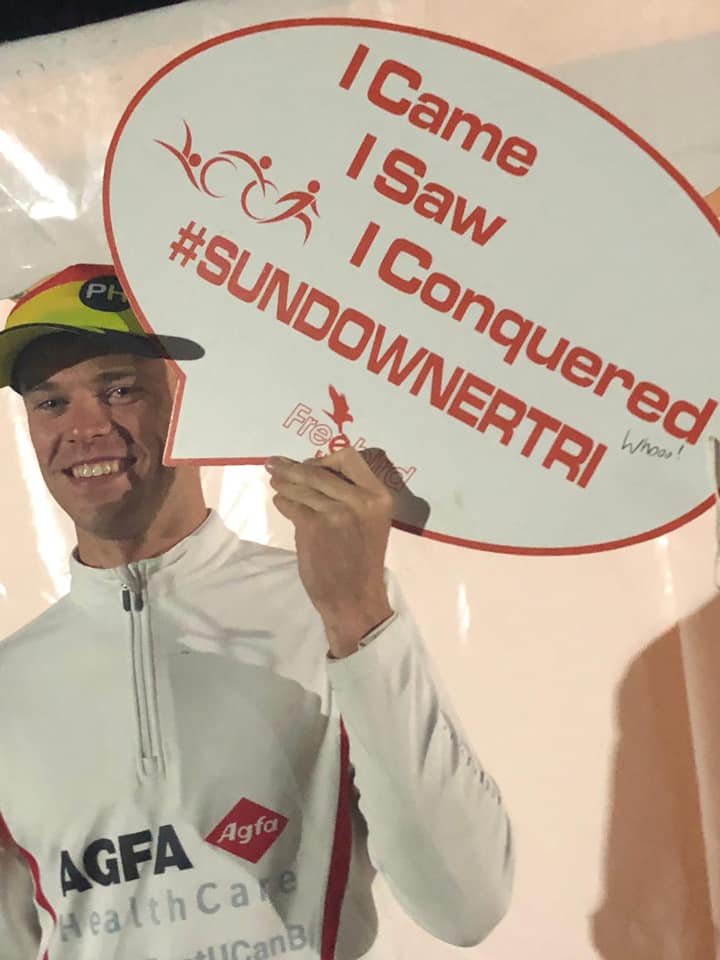