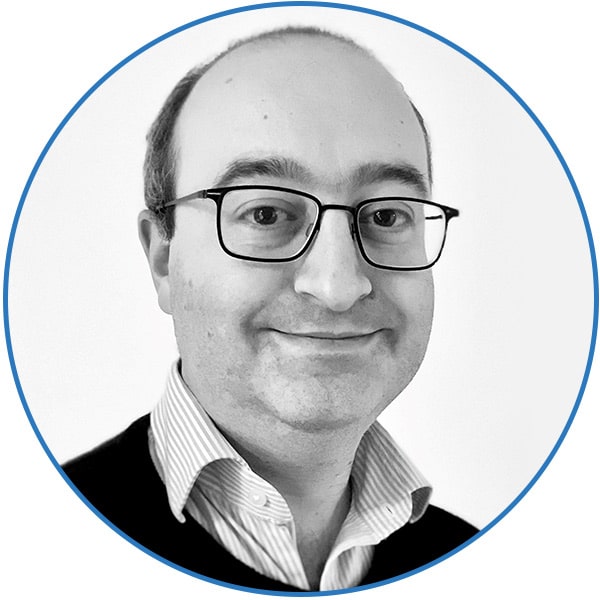 The project was launched in 2017 with the ambition to ensure that every patient in Yorkshire could attend an appointment and have full availability of their medical images and associated reports at the point of care. With the contracts for many of the region’s Picture Archiving and Communications Systems (PACS) set to expire, there was an opportunity to transform the way radiology services were delivered across the region and procure new systems that were better, faster, and equipped to cope with the increase in demand for radiology services.

Initially deemed as a cost-saving exercise, the YIC decided on a joint procurement programme, but soon found that inter-site partnerships could also resolve many radiology issues which they faced, such as staff shortages and workload silos.

Since then, the YIC has continued to push the envelope for regional collaborating networks as it strives to achieve full regional integration of radiology workflows across Yorkshire.

With staff shortages increasing each year and demand on services increasing, the YIC needed to redesign the radiology workforce across its eight sites.

Industry data, such as the Royal College of Radiologists’ (RCR) 2020 annual radiology workforce report, shows that the UK radiologist workforce is now short-staffed by a third (33%), with the shortfall expected to hit 44% by the end of 2025. As a result, 70% of radiology clinical directors feel they do not have enough radiology consultants to deliver consistent care, and in order to bridge the gap between service delivery and demand, NHS trusts routinely rely on outsourcing, locums and overtime.

Reportedly, there is an ever-increasing demand on the radiology services, but the number of radiologists retiring is higher than the number of entrants into the profession. This meant that a large proportion of imaging studies acquired in Yorkshire were being reported by outsourcing companies, which is more expensive and administratively laborious than using an in-house resource.

The Collaborative found that the problems caused by the disparity between service demand and capacity were enhanced by the integration challenges between the multiple regional PACS. The lack of interoperability meant that trusts were forced to rely on an Image Exchange Portal (IEP) – a national image transfer service – which clinicians had found to be unstable at times. If a Consultant thought that a patient had imaging services performed at another trust and wanted to view these images, they had to contact their administration team for access. The administration team would contact the trust where the image might exist, ask them to search for it, and then send it via the IEP. From start to finish, this process would take between 24 and 48 hours, and so the IEP platform was particularly unsuitable in emergencies.

Market research associations estimate that the number of ‘suboptimal’ scans (with poor quality imaging) is approximately 20%, with outdated methods of image sharing being a significant factor. In some instances, trusts were burning images onto a CD and sending them in a taxi to save time, but in most cases, clinicians would instead re-examine the patient to save time. This was not only disruptive for patients, but it also meant unnecessary exposure to radiation.

With the contracts for several PACS systems across the region set to expire, and the YIC already committed to a joint procurement approach, the Collaborative considered how it could improve image sharing as a group. The trusts initially considered procuring one PACS, however, this wasn’t feasible due to geography challenges, so the Collaborative began looking into ways it could work differently to solve the problems. The ambition was total interoperability between each of the region’s PACS.

Dr. Daniel Fascia, Clinical Lead for the Yorkshire Imaging Collaborative, said: “With multiple contracts up for renewal, we quickly recognised the opportunity to do more than just replace existing technology. There was the potential for bigger disruption, to rethink how we delivered radiology across the region. Everything was in place for us to enact real and lasting change.”

The solution – a radiology network across Yorkshire

The Collaborative established a concise business case and a list of technical, clinical and operational requirements to which industry suppliers could demonstrate their system’s capabilities.

Agfa HealthCare’s EI platform was set to provide the trusts with a unified imaging platform, complete with clinical tools, reporting functionality and a powerful workflow engine to maximise productivity.

XERO, web-based platform, was also deployed as part of the project. XERO is a sophisticated piece of viewing software which offers clinicians the ability to share images with other XERO users as part of the XERO Exchange Network (XEN) – a particularly intuitive solution within collaboratives, regional networks and integrated care systems (ICSs).

In equal measure to the all-encompassing nature of Enterprise Imaging, XERO XEN moves the Collaborative one step closer to achieving total workflow interoperability.

In October 2017, after a competitive procurement process, the contract was signed for Agfa HealthCare to implement its Enterprise Imaging (EI) solution and XERO Universal Viewer at the following eight NHS trusts:

A Collaborative approach to Implementation

In phase one, the YIC introduced EI, starting with Harrogate and District NHS Foundation Trust on 28th April 2018. Customary to any large-scale digital transformation project, an important factor in its success was achieving stakeholder buy-in and minimising resistance to change. Dr. Fascia commented on the challenges in delivering a multi-site project of this size:

“EI promised to deliver an incredible upgrade to productivity across the region, but the biggest hurdle was nothing to do with technology, it was getting people philosophically on-board with the project. Any source of change, positive or negative, is disruptive, and it needs to be managed very carefully.”

He elaborated on the reception from users:

“It took a few months to overcome the typical adoption curve. Engagement became easier as the project progressed, – we started to apply learnings from other installations and thinking more about the nuances of building a network to ensure consistency of performance across all of the hospital sites.”

The YIC took what Dr. Fascia describes as a “gentle” approach to the transformation, empowering stakeholders by giving them ownership over the project. “We listened to people’s opinions and highlighted how change was going to be enacted, as part of what we called a ‘franchise model’”, explained Dr. Fascia. “There were no mandates in our system – during our meetings we collectively agreed on how things should progress, this meant that when we delivered the project, there were no surprises.”

In early 2020, after various discussions with each of the eight trusts about the implications of the technology and the wider benefits it could achieve, the YIC pushed forwards with phase two. This saw the formation of the ‘XERO Exchange Network’, which involved connecting the individual instances of the XERO Image Viewer already in use across the region. “Rolling out XEN to a live system was a very important step for this project. It enabled the important ability of allowing images and reports to be viewed from anywhere across the Collaborative. This was vital to the project’s goals and future of our clinical service”, explained Dr. Fascia.

Each phase of the implementation ran smoothly, particularly given the scale and uniqueness of the project. The Yorkshire Imaging Collaborative can boast to be the first clinical group to use XEN in the UK and the first to facilitate image sharing across a region of its size. 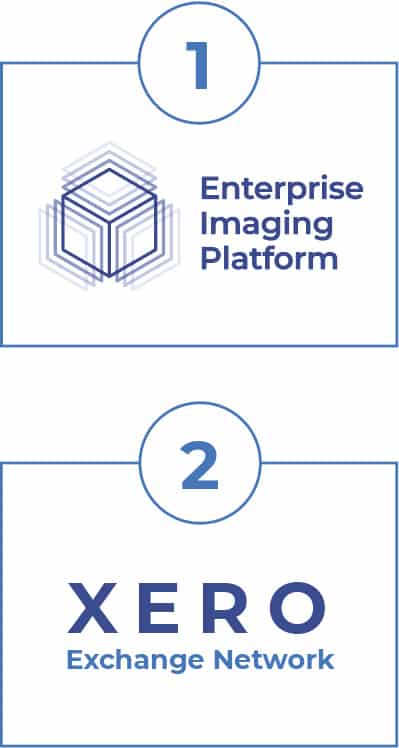 Empowering the workforce and improving the delivery of patient care

By June 2020, the XERO Exchange Network (XEN) was operational across the YIC. Its impact was immediate, with staff across the region benefiting from having images and reports instantly available at the point of care delivery. The Enterprise Imaging and XEN technologies enabled clinicians to deliver more effective remote care, or care closer to the patient’s home, thus reducing the need for patients to travel across the region unnecessarily. Rather than transferring images, radiologists in the region can look into other PACS and consultants can reject and cancel multiple imaging requests due to being better informed than before.

Having this access to previous images optimised the quality of radiological reporting, helping the YIC to achieve what Dr. Fascia describes as a “gold standard of care”, with improved safety and quality. The technology also minimises the likelihood of repeat examinations, providing financial benefits for the eight Trusts, but Dr. Fascia and his senior project team consider the improvements to patient care, particularly in emergencies, to be the most significant. Within these urgent situations, imaging was immediately available, supporting faster clinical diagnostics in critical scenarios.

The XERO Exchange Network has also provided significant time-saving benefits in administrative tasks, with less time spent transferring images via the IEP. Before the appointment of EI, the Collaborative had several members of staff whose role was to transfer images, yet since the deployment, the YIC has been able to redeploy these resources elsewhere. In short, the conversing of sophisticated EI plus the connectivity of XEN has allowed the Collaborative to access and view other PACS across the region to obtain a complete view of the patient’s imaging history and significantly improve the service to the Collaborative’s 4-million patients.

“With access to a patient’s imaging history, consultants are reassured to know whether or not something they have spotted has been identified before, which prevents patients from being recalled to hospital and facing unnecessary exposure to radiation. Not only is it saving time for patients and clinicians, it is also supporting better clinical decision-making and better patient outcomes because clinicians have far more information than they had before, at the click of a button.”

The YIC’s next project is facilitating cross-site reporting; a key functionality which will help trusts to share the burden of radiology workloads. Dr. Fascia explains:

“Enterprise Imaging has been a very successful PACS replacement across our Imaging departments. It’s a very modern piece of software which has a higher emphasis on workflow and built-in image viewing capabilities. The YIC found it to be an incredible productivity upgrade.”

“As a Collaborative, XEN allows Yorkshire NHS trusts to collectively access radiology reports and view all images across our entire region, completing the clinical history and helping us to write more accurate reports. Because of this solution, we have more capacity and a better understanding as a whole, rather than as individual trusts.”

“As a radiologist, EI helps achieve that gold standard and is what makes a difference, to us and patients, on a daily basis.”

The Yorkshire Imaging Collaborative project has afforded Agfa HealthCare to create a comprehensive list of benefits for users and beneficiaries (including clinicians, C-suite personas and System Administrators) which we have placed on our dedicated Regional Network and Integrated Care Systems (ICS) landing page.

Below is a summary of these benefits for a selection of key stakeholders. 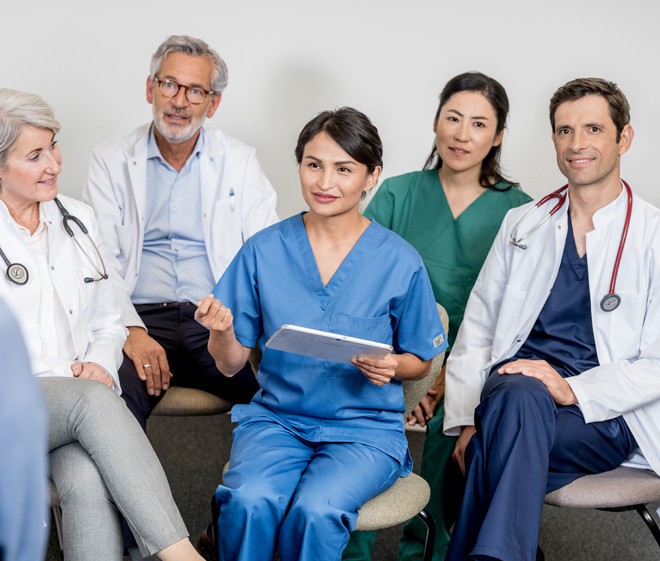 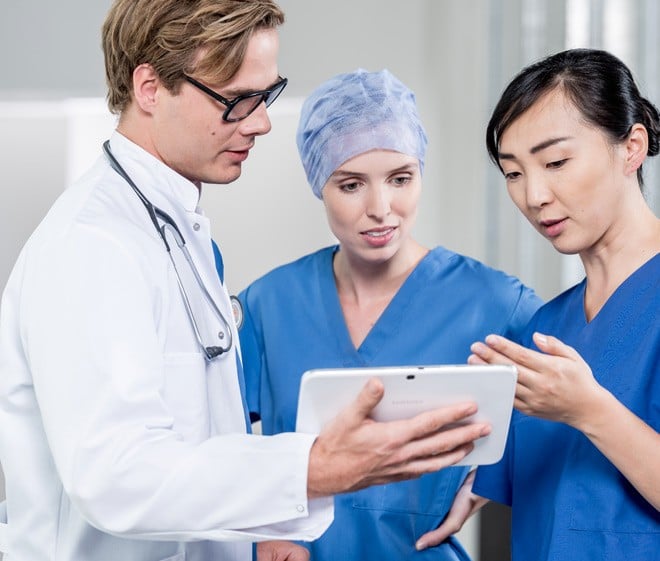 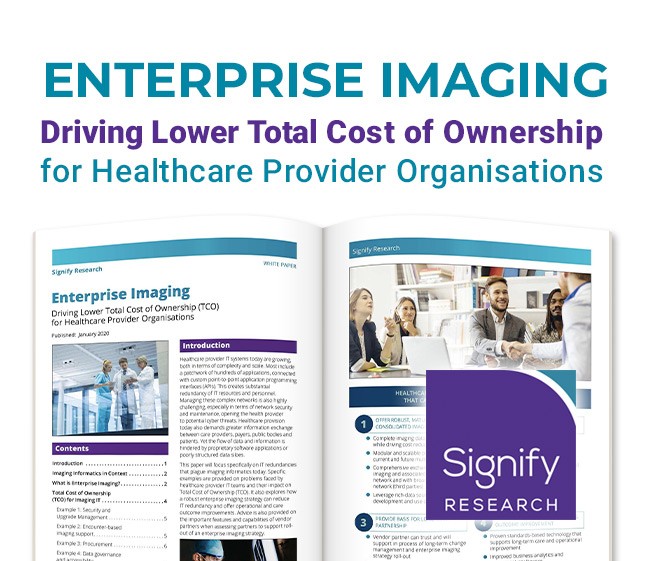